Making your websites beautiful needn’t be ugly on your pocket. If you want to step up from free design tools but can’t justify lashing out on full-on professional suites like Adobe Photoshop, check out the company’s latest hobbyist bundle, unveiled this week. These new Photoshop Elements and Premiere Elements photo and video editing suites have been eagerly anticipated, especially by Windows Vista users demanding a cut-price Photoshop offering that makes the most of their troubled but pretty GUI.

I agree with WebMonkey – amid a broad selection of feature updates and cosmetic enhancements, undoubtedly the most exciting bonus is full integration with Adobe’s new online sharing service, Photoshop.com. Both Elements packages now offer automatic backup of images and videos. Use a free Photoshop.com account or stump up for a pay version with more storage space. All syncing operations are transparent and dynamic. Make changes using the online editor, and the next time you open the desktop version, it’ll update to match, stacking on top of the original.

Photoshop Elements and Premiere Elements will be available towards the end of September for Windows XP and Vista at around $100 each in the States, or £111 including VAT in the UK for both suites in a bundle.

An Honest way to cheat?

An Honest way to cheat?

Hands up who wants to have a go with the Speedo LZR Racer suit?

The Olympics are a golden memory now, especially for those athletes involved in the Water Cube in Beijing, and more importantly for those that were wearing the Speedo suit. Watching from the comfort of your living room it was the best way to spot a minnow

from a shark, in other words who has a good marketing agent.

While I agree that what Micheal Phelps achieved was spectacular, I can’t help wondering; has technology and science (this time) got in the way of celebrating a human achievement?

People began mumbling about the incredible Speedo suit but then just somehow accepted that they were witnessing world records being smashed left, right and centre, but when the 100m sprint got a new world record in the Birds Nest stadium it was it was enough to send goose pimples down your spine. The makers of the Speedo suit have been strangely quiet, accepting not much credit at all (until you hit their website) – anyone would think they were a British company with a reserved stiff upper lip.

The way this remarkable suit works is by engineering the surface so that it is smooth, not rough. The tradition to date has been to make suits rough so that a thin layer of turbulence results in water-water friction, but in the new suit a composite material creates very low suit-water friction directly. The swimsuits also have elastic properties that squeeze the body much more than traditional suits; uncomfortable but evidently worth it!

“It’s clearly not cheating because it doesn’t break any of the rules,” says Mike Caine, director of the Sports Technology Institute at Loughborough University. It’s no worse than one athlete training with a better exercise machine than another, he says.

I’m sure sports equipment and clothing would never be banned but is it a step closer to ‘cheating’ in a sport, the same way as perhaps taking steroids is banned?

Tags: Olympics, Science, Speedo, Technology
Posted in Uncategorized | Comments Off on An Honest way to cheat?

Government tries to bring the funny, gets accused of wasting money

Government tries to bring the funny, gets accused of wasting money

The UK government was criticised for wasting money this week after it uploaded a light-hearted video response to a petition onto YouTube.

Critics were quick to pounce, accusing the video of a waste of tax payers’ money. A spokesman from the Conservative Party stated that: “While the British public is having to tighten its belts, the government is spending taxpayers’ money on a completely frivolous project.”

Downing Street responded by stressing that the video had not cost any extra money to make and was whipped up by a member of staff in half an hour. “It was a pretty light-hearted petition, so we gave it a light-hearted answer,” was the official line.

It is interesting to see that the government is making a concerted (if sometimes clumsy) effort to engage with Web 2.0 concepts and technology. Downing Street relaunched its main website last week with a strong emphasis on video content. Although hit by a number of amusing glitches – such as accidentally publishing a test page accusing a former communications advisor of being a “prat”, its up now and looking pretty good.

As for the video, I honestly don’t know if it’s a waste of money or not. But with all the criticism it’s received, it may have been a waste of effort.

Posted in Uncategorized | Comments Off on Government tries to bring the funny, gets accused of wasting money

The iPhone in London

The iPhone in London

A few weeks ago, the American branch of Prompt hit the streets of Boston to find out what people thought about the iPhone. There was excitement, disappointment and a few laughs.

Shortly after, Terrie and Laura from the UK team hit the streets of London to get the British reaction. Predictably, enthusiasm was less pronounced, but there were still some interesting opinions on display, as the video below demonstrates.

Posted in Uncategorized | Comments Off on The iPhone in London

Microsoft out of the window?

Microsoft out of the window? 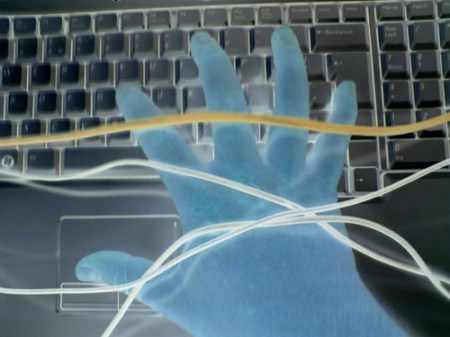 Sometimes I feel more cyborg than human after twelve hours slumped in front of this screen. Am I alone? With the internet doing all my thinking for me, my fading laptop keyboard and beleaguered mouse tapping and clicking away like autonomous extensions of an increasingly bedraggled sedentary body mass, my adopted electrical brain still insists on continually bleating: “Windows has encountered a problem…” And yet unfathomably this all remains somewhat acceptable. It’s just how it is. All of which makes me wonder if my blinking reaction to this week’s news of Microsoft’s leaked future plans for its operating system are typical or skewed by my tragic computer dependence.

Internal Microsoft documents which somehow fell into the hands of editors at Software Development Times revealed plans for a new modular operation system project codenamed Midori. According to the leaked information, the new OS would be developed from the ground up to be internet-centric, service-oriented, and geared towards highly connected users, distributed computing, shared resources and mixed environments.

Looking for positives, I’d say that re-engineering something so pretty but fatally flawed as Vista as soon as possible could only be ‘a good thing’. No matter how much processor power, memory or patching I throw at the thing, it remains horribly slow and clunky, riddled with error messages and incompatibilities, and bizarrely deskbound in a tech world long dominated by connectivity and internet content. On the downside, each time Microsoft decides to revamp its operating system, I find it an enormous upheaval that also usually results in me wanting other revamped things too – like new laptops, service providers, desks, a house…

Perhaps it’s not surprising in a way. Like many people I plug myself in – literally I guess taking into account my headset – every weekday morning after coffee, and apart from necessary ‘bio-breaks’ I’m still there or thereabouts until bedtime. It’s only natural then that this sudden news of my 17-inch widescreen immersive world changing – perhaps radically, perhaps disappointingly – is a little daunting. How will all my other hardware and software bits and bobs react? Will we all still get along?

Moreover, if Microsoft does go ahead with its roadmap of OS alterations, does this mean we will all have to shell out a hundred pounds or more for upgrades or standalone installations every few years (or worse if we all get tetchy and buy new pre-installed laptops)?

Discussing this in my office this morning, one of my colleagues chipped in helpfully with: “Linux! Linux! Linux! Linux!” A compelling argument well put, but a call I’ve resisted to date. I’ve flirted with dual-boot a couple of times, but deep down although I proclaim to hate Microsoft on an almost hourly basis, I do ultimately trust it more than any other OS manufacturer to hook-up easily with my array of peripherals and support all the various software tools and doodads I now have hanging around on my home network.

Although it has just about managed to skirt on the legal side of monopoly, any layman will tell you that Microsoft does, really, actually, utterly dominate the operating system space in any sense that is meaningful. Fortunately, its desire and stated intent to move away from its deskbound comfort space into wider web waters will certainly put it up against more formidable competition than Linux can currently provide, notably in the shape of Google, but inevitably also with myriad newcomers and upstarts eager to show off innovation and grab a slice of Microsoft’s pie.

At this stage, news of Microsoft’s Midori research project roadmap all pretty much stems from those leaked internal documents. It will prove useful to the market as a whole, as analysts and developers gauge public reaction through online discussion. The problem as I see it over the longer term will be the sheer diversity of those reactions.

How blind is loyalty to Microsoft, despite the heartache and tribulation it frequently puts its users through? Will this news boost or deflate the Linux and open source community? Where does this leave Apple and its pile of pleasing gadgets in terms of OS provision? Can Google really win hearts and minds in the operating system world as easily as it has won eyes online? Is Microsoft being remarkably astute in laying out its plans for a more flexible internet based platform this far ahead of realisation, or is it playing in to the hands of its rivals? Should I budget for a new laptop, or simply get out more?

Please chip in with your own thoughts – I’m sure to be online somewhere to read them – Vista permitting.

Tags: Linux, microsoft, Midori, operating systems, vista, Windows
Posted in Uncategorized | Comments Off on Microsoft out of the window?