Gates and Seinfeld make way for 'I'm a PC'

Gates and Seinfeld make way for 'I'm a PC'

Microsoft has just moved onto the second stage of its latest advertising campaign. The first stage made headlines as Jerry Seinfeld joined Microsoft’s Bill Gates for some fun and quirky sketches that seemed to be about nothing related to Microsoft. Seinfeld and Gates made for an interesting comedic pair and seeing Seinfeld, I couldn’t help recalling his hilarious ‘sitcom about nothing’.

Just a few weeks ago, around the corner from our office in , a Seinfeld “Campus Tour” was held to honor the show and some of its most famous moments. The famous Soup Nazi was signing autographs and crowds of people gathered to meet him, get his autograph and simply soak up the memories of the Emmy Award-winning comedy show. The dynamic duo of Gates and Seinfeld are amusing, and provide humor about nothing just as the series did for nine seasons.

As you can see, we’re big fans of Seinfeld here at Prompt, which is why we were a little surprised to see that Microsoft has dropped the comedian for the second stage of the advertising campaign. Microsoft’s latest TV ads confront Apple’s ‘I’m a Mac, I’m a PC’ commercials, and feature the PC actor from those advertisements. Although Microsoft claims that this stage of the campaign was planned to highlight “real people” who use Microsoft products, many have speculated that Seinfeld was dropped because his commercials were proving unsuccessful. Microsoft is staying quiet about this, but they haven’t ruled out the possibility of Seinfeld returning later in the campaign.

The new ‘I’m a PC’ advert has been created by agency Crispin Porter & Bogusky, the same organization behind the legendary Subservient Chicken online advertisement.

Tags: Advertising, microsoft, Seinfeld
Posted in Uncategorized | Comments Off on Gates and Seinfeld make way for 'I'm a PC' 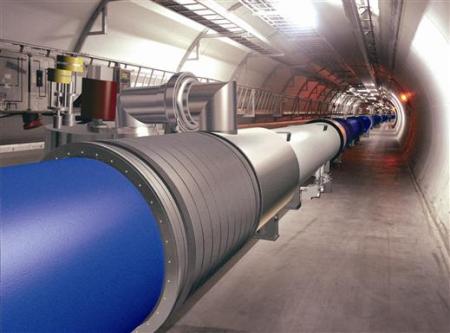 Last week, as we all know, the LHC, or Large Hadron Collider experiment kicked off at the European Organization for Nuclear Research (CERN) in Geneva. Although the experiment’s ultimate objective is to split elementary particles in beams of protons to prove the existence of Higgs boson, all it has managed to do so far is split observers around the world into two camps – those who think it’s all rather cool and exciting, and those who think its really dangerous and will end with the planet being sucked cataclysmically into a tiny black hole on the banks of the Rhone. Or something.

This week however, a third, covert camp has emerged – those who weren’t excited or scared enough by any possible remifications to time and space to prevent them thinking that a bit of old fashioned hacking might give such events a bit of extra spice.

The hacking group, going by the name of ‘The Greek Security Team’ broke into networks at CERN last Wednesday, and uploaded a new web page describing the facilities’ IT security staff as “schoolkids”, while also stating they had no intention of disrupting the experiment (once a techie…)

According to The Times, the hackers “targeted the computer system of the Compact Muon Solenoid Experiment, one of the four detectors that will be analysing the progress of the experiment.”

James Gillies, a spokesman for CERN, said: “We don’t know who they were but there seems to be no harm done. It appears to be people who want to make a point that CERN was hackable.”

Now, being opinionated on the subject of hacking is somewhat tricky. I realise that hacking can be disruptive and can cost private business and public organisations millions in lost revenue due to downtime. I also realise that hackers are also just a massive pain in the neck for security teams and developers. But I’m generally also a bit shocked by the severity of censure levied or threatened in the direction of confirmed hackers, especially when they are so often just misguided youths.

My gut reaction to the repurcussions following this latest breach is that CERN staff have proven themselves to be extremely reasonable and lenient in their view of the incident. Maybe they were just pleased to be pointed in the direction of a potentially serious vulnerability? Maybe they just raise chilled techies in Geneva. What I do know for sure is, lackadaisical or not, I certainly prefer CERN’s attitude to that of NASA, which is still pushing for a maximum prison sentence of up to 60 years for Gary McKinnon (or Solo), the self-confessed British hacker who broke into space agency networks and is now appealing for leniency on the basis of alleged Asperger’s syndrome.

Ever since Super Mario Bros. taught proper plumbing techniques in the early ’80s, videogames have made a practical difference in people’s lives. Whether it’s been used to prepare to defend against space alien attacks, learn hand-to-hand combat techniques and build civilizations, we consciously and unconsciously pick up valuable skills while playing videogames.

It comes as no surprise then that an 11-year-old girl rescued her family who were trapped in their overturned car, using knowledge that she picked up by playing Grand Theft Auto. The preteen knew from playing the game that cars can spontaneously burst into flames from rolling over.

Here’s the description of what happened from the article:

“About 9 p.m. Aug. 27, the family of five was en route to visit relatives in Diamond when Karen’s husband, Robert Norris Jr., felt lightheaded while driving on Route 113 about one-half mile east of . Their 2000 Jeep Grand Cherokee drifted off the road while moving 55 to 60 mph, struck a guardrail and flipped four times before coming to rest on its side in the ditch. The roof of the vehicle caved in and the back window broke out.”

Luckily, everyone had seatbelts on and came out unscathed minus a few minor cuts and bruises. The parents lost their glasses and were dazed, but the girl was composed. She climbed out of the broken back window, pulled her mother out and then helped get the rest of the family out of the vehicle. The car didn’t blow up in any cool explosions, but it was certainly totaled.

With her quick thinking and realization of a remote possibility because of a videogame, she saved her parents and siblings from certain doom waiting for paramedics. So the next time you hear someone say that a violent videogame needs to be banned, remind them that it just may save their life.