World Usability Day 2010 will be held on 11 November. This year will see over 200 events being held across more than 43 countries – all to remind the general public as well as customer experience professionals of the most important issues steering good usability research, development and practice.

The overriding theme this year is ‘communication’. Organisers hope that plenty of individuals and agencies around the globe have been preparing creative, entertaining and thoughtful ways in which to promote greater awareness for the designs, gadgets and services that help keep us all communicating.

World Usability Day uses the tagline, ‘making life easy’. This statement encapsulates the major goal of everybody taking part – to ensure that all technology is first and foremost developed to make the every day lives of people easier and more user-friendly.

Just a couple of decades ago, a young boy or girl with a keen interest in reading, cinema and science was regarded as smart and modern. In 2010 teenagers with the same interests are derided by their peers as geeks and nerds. That’s why the youth of today are destined to perish in a fiery mechanical apocalypse. You see, most young people now haven’t even heard of Isaac Asimov, let alone the The Three Laws of Robotics.

They’re doomed. We all are.

The Three Laws were constantly revisited by Asimov as unbreakable rules built in to the fabric of all robots that could never be bypassed. They first appeared explicitly in the 1942 short story Runaround, but every Asimov robot had been abiding by them for some time before that in tales like Liar!, Robbie and Reason. In case you need a reminder, the Three Laws of Robotics are:

So what the heck is Colorado’s SparkFun Electronics trying to achieve with its Antimov Competition? Bored with robots that simply function as designed without killing each other or their creators, SparkFun has come up with this dangerously subversive contest: “The Antimov competition challenges you to design a robot which breaks the laws of robotics. Building a competent and efficient robot that completes its task unharmed is SO last year. We want you to build a robot that completes a trivial task in the most inefficient and laborious way possible. Oh yeah, and it needs to destroy itself doing so…”

Arrg! SparkFun claims it merely wanted a competition that focused less on engineering abilities and more on creative ingenuity, but anyone with a youth misspent immersed in Science Fiction knows the stark reality – Colorado has been taken over by maverick mechanicals and humanity is at their mercy.

A new campaign aimed at encouraging more people in the UK to use the internet, kicked off this morning.

‘Get Online’ is targeting nine million Britons, including the elderly and less well-off, promoting web services that could save them time and money.

The digital inclusion week is being supported by Race Online 2012 partners including the BBC, the Post Office, Three, BT and MLA.

More than 3,000 events have already been planned with the aim of getting 80,000 more people online by 24 October.

Banksy opens for The Simpsons

Banksy opens for The Simpsons

If you didn’t see last night’s new episode of The Simpsons, then you missed one of the most original – and dark – opening title sequences ever featured in this legendary animation series, storyboarded and directed by none other than Banksy.

Perhaps you’re not entirely familiar with Banksy or his work? Well, he’s a British street graffiti artist whose stature and fame on the international scene has rocketed over the last few years, due as much to the mystery of his identity as his subversive art. Everyone loves an enigma, it seems, especially if they spend their time spraying up satirical stencils on walls from Bristol to Bethlehem. And now in Springfield!

Presumably though, given the content of the sketch, Banksy has donated any fees or royalties gained by his critique to organisations attempting to dismantle sweatshops?

Tags: Banksy, graffiti, The Simpsons
Posted in Uncategorized | Comments Off on Banksy opens for The Simpsons

Laurie's pledge and the 'Chase for 28'

Laurie's pledge and the 'Chase for 28'

I like October – I always have.  But there’s just something about Major League Baseball in the Fall that makes it that much better.

I’m keeping this short and sweet.  While my colleague Rob sweats it out over the New England Patriots  – I’ll be draping myself with pinstripes and biting my nails through this month while my beloved Yankees battle their way through the ALDS.

I leave you all now with a heartwarming picture (below) and a pledge: I Laurie SantaLucia, will be doing my part this playoff season, by writing everything (electronically, at least) in navy blue. Starting…….now.

And the chase for 28 continues….

Tags: ALDS, Major League Baseball, Yankees
Posted in Uncategorized | Comments Off on Laurie's pledge and the 'Chase for 28' 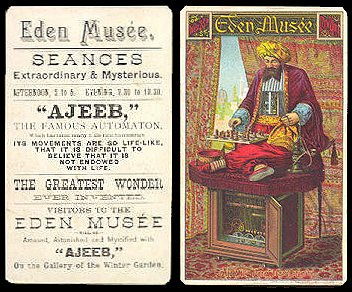 This week you may have come across articles announcing Amazon Mechanical Turk (AMT), a new service that promises businesses and developers an ‘on-demand scalable workforce’ that will grind out repetitive, expansive marketing tasks. Surprisingly perhaps, the real power behind this technology is everyday people – armies of them recruited to labour such tasks in the background in return for flexible hours and results-based pay.

Although this idea of blindly tapping monumental workforces is interesting in itself, my attention was grabbed more by the branding than the concept. I first learnt about the original Mechanical Turk when I started work as a technology journalist way back when. Accepting the risk that I’m probably just teaching you all how to suck eggs, I thought the Amazon launch was a decent enough hook to excuse retelling the story.

An 18th century Viennese courtier named Wolfgang von Kempelen built the first Mechanical Turk. It took the form of a life-sized animated wooden man in robes and a turban, seated at an enclosed desk, complete with chess board. Kempelen would take his Turk to visit the homes and palaces of the great and good of the day – reputedly including the Emperor Napoleon, Benjamin Franklin and the then undisputed computer whizz-kid, Charles Babbage.

After opening doors at the front of the Turk to reveal an impressive array of cogs, bells and whistles, Kempelen would challenge his host to attempt to beat the apparently Mechanical Turk at a game of chess. The automaton was not only able to move pieces around the board – impressive enough for an 18th century machine – but it would repeatedly thrash its opponents at the game.

The Mechanical Turk toured the world for decades, outliving Kempelen, before being lost to the world. Such was the enduring interest however, that in 1984 an American called John Gaughan, who builds tricks for magicians, spent over $120,000 building a Turk as near as possible to how many believed the original to have been.

And the Turk’s secret? Well, you can find out for yourself online, or read this interesting book for a slower reveal. But, and I assume this was Amazon’s reason for adopting the name for its latest service, you can be sure that old-fashioned human brain power was the secret ingredient to its success…

#1
My hens have celebrated the start of Autumn by laying perfectly spherical eggs. Or perhaps they’re just getting excited about Europe’s forthcoming victory in golf’s Ryder Cup, played out in Wales this weekend? Either way, these are the little beauties I’ve been collecting this week: 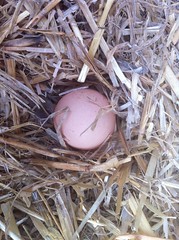 #2
I’ve got a bit of a thing for Icelandic music. Sigur Rós, múm, Stafrænn Hákon, Mugison, Hjaltalín… try and name an unpronounceable act associated with the country and chances are it’s part of the soundtrack to my daily copywriting. This week however I got to see one of my favourite bands, Amiina, play live in support of their new album ‘Puzzle’. Once the string section for Sigur Rós, Amiina play spellbinding tunes as they move around stage swapping violas and harmonia for glockenspiels, table harps, melodica, kalimba, celesta, glockenspiels and even wood saws. In the Summer I even saw them play soundtracks under a screen of paper silhouette fairy tales. Not everyone’s cup of tea, but an amazing evening if you like that sort of thing! 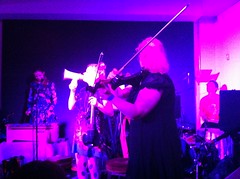 #3
Cycling down country lanes in the drizzle by a full moon, I saw a moon rainbow. Now I’m no young dog, but I never even knew these were possible! Straight across the night sky, a huge rainbow in gradients of greyscale with just a hint of the colour spectrum. Have you ever seen such a thing? Sadly my iPhone camera wasn’t up to the task of capturing the moment, but I’ll certainly be on the lookout for more now I’ve spotted my first ‘moonbow’. Here’s somebody else’s moon rainbow photo to give you some idea of what I saw: 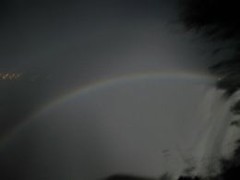 Earlier that same day, double rainbows had been hopping over my house too – far more common, but still very welcome! 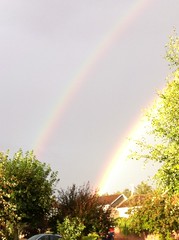 So that was my week. Not particularly exciting, granted, with much of the rest of the time spent sat in front of my keyboard hurling abuse into a technical void. But it’s good to get out once in a while, eh?

Have a great weekend, and don’t forget to let us know all about it!